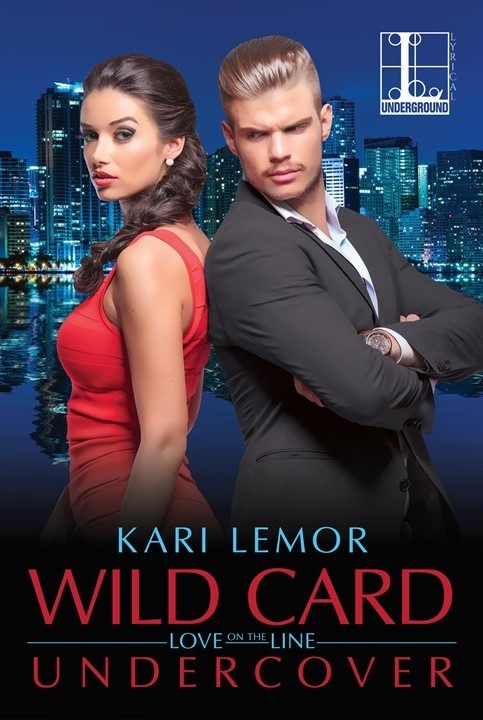 It’s here! The cover for the anticipated debut by Kari Lemor, WILD CARD UNDERCOVER. The first in the Love on the Line series will be published by Kensington Lyrical Underground – March 2017, and I can’t wait! Until then here is a little of what you can expect from this upcoming must read.

All that glitters in Miami is not gold…

Lured in by a bad ex-boyfriend and the moonlight of Miami, Meg O’Hara is trapped in a nightmare situation, waiting tables for a crime boss and fearing for her life. When undercover FBI agent Christopher Shaunessy offers her a way out, she seizes it. Getting the goods on Salazar Moreno might not be easy, but she’ll do anything to be freed from her servitude and Moreno’s sexual advances, even if it means moving in with the charismatic agent.

Chris Shaunessy pretends to be Meg’s lover in order to keep her safe, but he steels his heart against further involvement. Passion has no place in the sordid world of organized crime. And yet, the closer they get to cracking the case, the stronger his feelings for the spirited waitress shine. It’s a dangerous game he’s playing, and taking Meg in his arms for real could prove a fatal misstep . . .

“Does that man never have a day off?” Margaret Kathleen O’Hara grumbled, grabbing her tote bag and sarong to move surreptitiously along the chairs by the pool. If the hotel manager saw her here again she’d be toast. He’d more than toss her out. Threats to call the police had been thrown at her for months now. Although in her case, that might be a better deal.

With her eyes trained on his location and the Miami sun beating down on her exposed skin, Meg backed along the water’s edge attempting to leave the area before he spotted her. She needed to shower the chlorine out of her tangled hair and change for work soon. He looked in her direction and she rushed behind the closest object. It was six-foot-plus of blond-haired gorgeousness. The man’s eyes were glued to something on the upper deck. Her boss was sitting there with one of his expensive bimbos. Did Blondie like that type? Maybe he wouldn’t notice her little game of Hide and Seek.

She leaned around him, ducking back when she saw the Pool Nazi still present. Getting caught was not an option. She already owed more than she could ever repay.

“Are you okay?” Forest green eyes stared down at her, puzzled. Would he buy that she was simply looking for shade? He was big enough to provide it.

With strong hands, he reached for her shoulders and Meg reflexively batted them away. She got enough of people groping her at work. Scorching curses froze before erupting from her mouth as the hotel manager moved, staring in their direction. Her mind kicked into overdrive, scrambling for a way to hide in plain sight.

“Sorry,” she squeaked. Grabbing the man’s head, she planted her mouth solidly on his. Short, thick strands of hair tickled her fingers. Firm lips yielded no resistance to the increased pressure of her mouth. Better make this look good.

An electric current skittered over her skin causing her heart to race. Maybe too good? Slowly he pulled her closer with his muscular arms. Her eyes flew open and she broke the connection. His hair-covered chest was too close for comfort. And much too tempting. Distance, she needed distance.

Her eyes darted around, seeing no signs of the manager. A sigh escaped. Time to make her exit as well.

“Sorry,” she mumbled again, looking up. Big mistake. The stranger’s curious eyes captivated her. They were soft and tender and filled with something she could…trust? If she still had any of that left in her. His hands were gentle as they held her. A tiny smile played about the full lips she’d brazenly kissed. She couldn’t believe she’d done it. Her mother would be appalled. But it had worked.

The chlorine scent from the pool faded into the background as sweat and suntan lotion wafted off the man’s damp skin. Her stomach did cartwheels followed by a few back flips. Dangerous.

“Let me go,” she hissed as reality returned. She gave a swift shove at his well-defined pectorals, rushing to get past, to escape from this distraction and the possibility of being caught. Her head whipped around at the sound of a splash and water droplets from behind. Gorgeous was just breaking the surface of the pool. Had she pushed him that hard?

“Oops.” No time for apologies. He looked like the forgiving type. She had to blow this joint before the Pool Nazi came back. Grabbing her fallen sarong, she ran across the deck to hustle inside the luxury hotel.

The manager stood sentry near the front door. A crowd appeared at her back making that way impossible. The stairwell to the left would have to do. She’d go up a few floors then down to the side entrance. She wrapped her sarong around her as she carried out her plan to avoid being seen…and caught.

Meg should stop coming here to use the pool: this proved it. Sneaking in was adding to her already hellish life but swimming always helped work out the stress and the pool here was more accessible than any other on the strip. Pretending she had money to stay in a place like this, rubbing elbows with all the beautiful people, yeah, that got her through too. She’d learned the best times to come and not be seen. Well, for the most part. It was well worth the risk to get away from her dump of a room and its enchanting neighborhood. She’d leave this all behind her soon. She kept telling herself that. Had to believe it for her own sanity.

Footsteps behind her pushed those thoughts away. Her bare feet padded silently along the lushly carpeted hallway. Heart racing, she ducked into the ice machine alcove, her sigh echoing in the silence. She glanced down. Her bag? She must have dropped it as she rushed off. How had she not realized? It couldn’t have been the threat of being arrested. Or the crooked smile of the handsome stranger she’d kissed. The one with the kind eyes and gentle hands. No, she couldn’t allow herself to be led astray by a pretty face. Not again.

She continued down the hall, her trip cut short when someone grabbed her by the arm and spun her around.

Need More? Pre-order and have it at your fingertips on release day: WILD CARD UNDERCOVER Pre-Order

For more information on Kari Lemor or her Love on the Line series from Kensington Lyrical Underground, follow her on social media.

Discover your dark side with this thrilling, sizzling romance.

A Present Under Her Tree

My sexy Xmas short story, A Present Under Her Tree, is available as part of Short Fuse Publishing’s Hot Holiday Reads, The Stockings Were Hung.